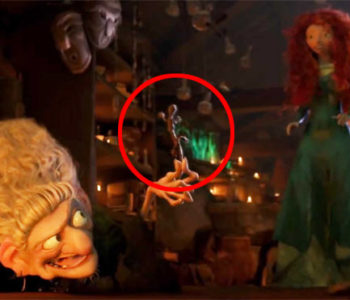 When the witch is brewing the potion for Merida's mother she throws a couple of ingredients into the cauldron including the main character from cancelled Pixar movie, Newt.

During the potion making scene when the witch is making the tart that ultimately turns Merida’s mother into a bear, the witch picks up a shriveled up newt and throws it into the cauldron.

That newt is actually Newt from, well… Newt. Newt was a movie canceled by Pixar in 2010 because its plot was too similar to Rio. And in going with the tradition of putting characters of upcoming Pixar movies into their current movies, Pixar animators had no idea Newt would be canceled and therefore added him in, along with Sulley from Monsters University which was also being worked on at that time.

While the newt is shriveled up and brown instead of the blue, brown and yellow colors of Newt from the movie posters, when the witch throws the newt into her cauldron you’ll notice that it actually emits a blue smoke, making the missing connection as Newts blue hands were a focal point of the movies advertising. 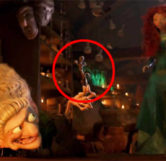 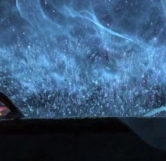 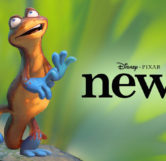