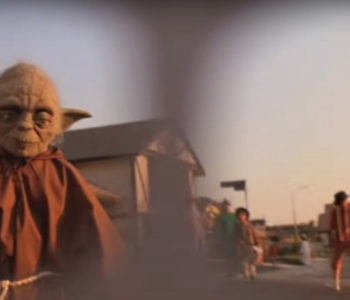 During the scene when Elliot and Mike take E.T. out on Halloween to go trick-or-treating, we see a kid dressed up in a Yoda costume which prompts E.T. to rush towards them saying, “Home, Home”.

In addition to the Yoda reference, if you listen closely to the soundtrack being played during this scene you’ll notice a hint of Yoda’s theme song from the Star Wars movies being played very lightly as E.T. begins to move towards Yoda.

This may be due to John Williams, the man who wrote and conducted the scores for both E.T. and all of the original Star Wars movies.

While this easter egg may seem random to some, Star Wars fans may remember a certain scene in George Lucas’ movie, Star Wars Episode 1: The Phantom Menace where a group of E.T. aliens makes an appearance in the Galactic Senate.

It turns out that George Lucas and Steven Spielberg did this as a favor to one another and promised to include easter eggs of these two characters in each others movies. 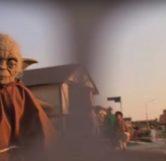 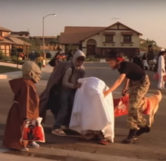 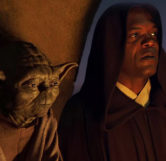