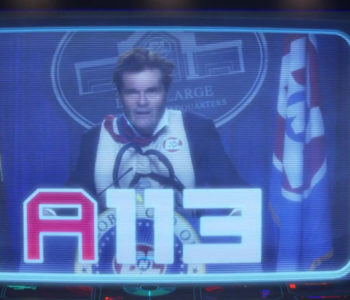 A113 is a recurring media easter egg created by alumni of the California Institute of the Arts. The number refers to the classroom used by the graphic design and character animation students.

In a SlashFilm interview with WALL-E director, Andrew Stanton the title of the movie itself is actually a reference to the famous room number A113. WALL·E’s name, when spelled out in Leet (originally a language used by hackers) is wA11-3.

Once EVE is successfully delivered to the bridge of the Axiom, AUTO gives her a quick scan in order to better understand the situation.

After the scan is complete, AUTO looks at the camera and we can see the number, A113 blinking on it’s lens.

After Captain McCrea finally comes into possession of the plant, he decides that it’s time for everyone aboard the Axion to go back to Earth and calls AUTO down from the bridge with orders it to “fire up the holo-detector, we’re going home”.

After receiving this command the camera shows us the world through AUTO’s lens where the number A113 can be seen blinking similar to the first occurrence.

After Captain McCrea tries to get the plant to the holo-detector but is blocked by AUTO, AUTO shows the Captain a more recent video from the CEO of Buy n’ Large which states that Earth is completely toxic and it’s better to cancel Operation Recolonize.

After making these claims, the CEO states that he’s initiating override directive A113 (with A113 blinking on the screen) which gives AUTO authorization to take over the Axion.

After the video ends we then see, for the last time, A113 blinking on AUTO’s lens. 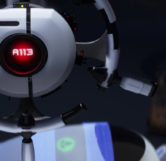 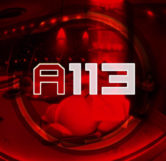 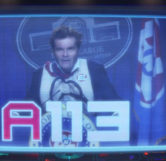 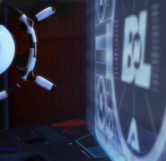