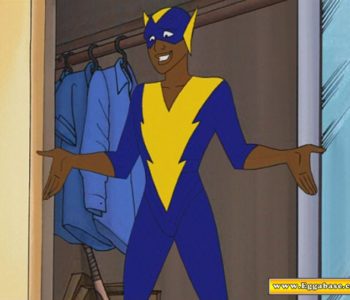 The costume of 70's super hero, Black Vulcan is shown briefly during the first episode of Static Shock.

In the first episode of Static Shock after Virgil finds out he has super powers he heads over to this best friend Richie’s house and they pick out a costume for Static together. One of the costumes that Static tries on is Black Vulcans (with the addition of pants).

A character under the DC Comics animation label (same as Static Shock), Black Vulcan is another African-American superhero that uses electricity as his super power. Premiering in the 1970’s, Black Vulcan played minor roles in the TV series Super Friends through the 80’s until the show died down in popularity. 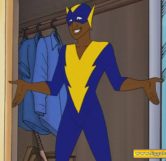 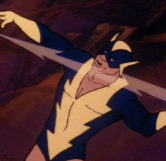 Hi I’m JarrietFair and I’m the black Vulcan this coming holloween. And I’m looking forward to it. This is in honor of buster Jones aka the real black black.

Sometimes people say I look like the black Vulcan super hero. But I just smile and laugh. If anyone my pictures? Then you can tell me. But I love being this super hero.

I have a question? Why didn’t black Vulcan have his own action live series like arrow and flash tv series? Yes he did have a cartoon character series on the super friends. But I think black Vulcan should have a series as well. I can honestly hope that channel 5 cw will take this in consideration. Tell me if you agree with me? I’m sure buster Jones would !

Black Vulcan wear shorts on the super friends. Though sometimes he did wear pants. But as a black Vulcan I don’t. I like for women to see my legs.

Great costume! I’m sure Mr. Jones would be proud!

Thanks. Glad you like my costume.that means alot to me

Hi I need to ask. Do you think that black Vulcan will ever have a action live tv series or be in a movie like catwoman.Halle berry?