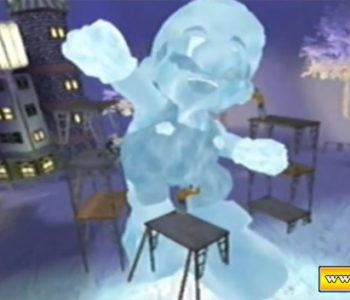 A large ice statue of Mario is shown multiple times during the Angel Light: Midnight City level and is depicted as being currently under construction by a team of 4 ice sculptors seen actively working during the cut scene when it’s shown.

The ice statue depicts Mario in his famous victory pose with one fist in the air and a big smile on his face. And while his outfit is all white and blue it’s clear he’s wearing his famous coveralls as well.

The Mario ice statue appears twice on the Angel Light: Midnight City level. The first time it appears is during the opening cut-scene where it’s most visible, having the camera rotate around it.

The second time is once you’ve crossed the finish line and your points are being tallied up. The statue is now covered by the “Results” boxes, but is still visible through the boxes. 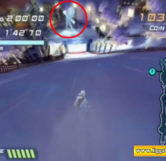 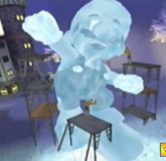