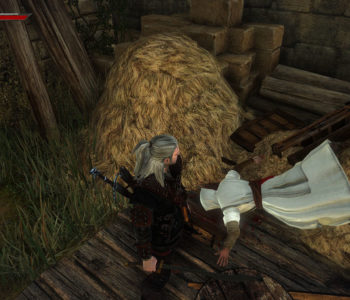 This page covers the Assassins Creed easter egg which unlocks the "Assassins" ability.

During the first 30 minutes of The Witcher 2, players might stumble across an interesting bit of scenery where an assassin sporting gear similar to Altair (the original assassin from the Assassins Creed series) is seen lying dead on the ground outside of a church.

Upon approaching the scene players will hear Geralt say, “Guess they’ll never learn.” followed by the unlocking of the “Assassin” ability. This is meant as a playful jab at the Assassins of Assassins creed who are fond of a stunt called the, “Leap of Faith” where they jump into a hay bale to get down from high ledges.

Though rumors have surfaced about this being a diss towards the Assassins Creed series since both games share the same genre, it’s believed by many to simply be a nod towards the famed assassins of old by showing us what would actually happen if you attempted such a stunt in real life. 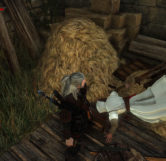