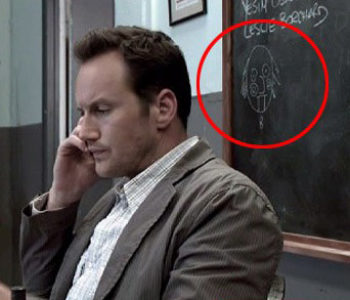 Roughly 30 minutes into Insidious after the alarm scene when we first see Josh’s classroom, on the detention list written behind him on the chalkboard is the name James Wan, the director of the Insidious films and one of the creators of the Saw franchise.

At the bottom of the list of names we can also see a drawing of Billy the Puppet, the iconic clown puppet from the Saw franchise which is often used to communicate with Jigsaw’s various victims via television or “in person” usually while riding a tricycle.

Underneath the Billy drawing is the number 8.  The number 8 refers to the 8th Saw film officially titled, “Jigsaw (release date 2017)”, which at the time Insidious released, was not yet in production nor was it announced.

James Wan can be heard in interviews expressing thoughts that there would most likely be an 8th Saw film, despite Saw 3D allegedly being the final entry in the series.

Additional Names
Also on the chalkboard are a number of other names which include a “Yesim Osman” and “Leslie Borchard”. Leslie Borchard was a hairstylist for the movie and Yesim Osman was head of the hair department.
Pictures and Videos 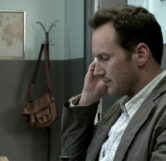 Billy the Puppet Drawing and the Number 8 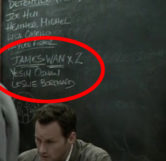 Director and Cast Names on Chalkboard